The walleye is a tasty and nutritious freshwater fish with 90 walleye fillet calories per 100 grams. When I first tried walleye fillets, I realized I was really missing out on a delicious meal. And it became even more enjoyable when I learned how to fillet a walleye.

I am at your service if you don’t know the methods for cleaning and filleting walleye. I brought you the easiest method to fillet walleye that I frequently use. But before that, let’s know how to bleed a walleye and clean it.

How to Clean Walleye Fish?

The method I use doesn’t necessarily need bleeding and cleaning fish except descaling. And you can also buy freshly cleaned walleye from the market. However, if you want to know how to clean a walleye in 10 seconds on your own, click here and follow the method step by step.

How to Fillet a Walleye Boneless?

1. Cut Behind the Gills

Put the walleye on the cutting board and cut behind the gills. Stop cutting when you touch the spinal cord.

2. Cut Towards the Tail

Turn your knife around, pointing the blade edge towards the tail, and start cutting. You will hear the clicking sounds of cutting ribs while running the knife. And don’t separate the fillet from the tail.

3. Flip the Fillet and Remove Skin

Flip the fillet exactly opposite to the fish. Now, hold the walleye, and starting from the tail end, slide the knife to remove the fillet from the skin.

Put the skinned fillet on the cutting board and place the knife right below the ribs. Using the sharp tip, slide the knife very near to the ribs. Use similar small/long strokes and remove the ribs from the fillet.

Repeat the same method step by step on the other side of the walleye to achieve the second fillet.

if you want to watch the complete video of the method.

How to Debone Walleye Fillets?

The zipper method is the best way to deboning a walleye fillet. And if you don’t know how to zipper a walleye, read below to know the easiest method,

Place the walleye fillet on the cutting board and feel the line of pin bones with your finger.

2. Cut on Both the Sides

Now, make small cuts on both sides of the pin bones.

The fillet will separate from the pin bones like a zipper, which is why the method is called the zipper method. Hold the other side of the cut and separate it using the same technique.

Here, you have two beautifully boneless walleye fillets which you can use for any of your favorite recipes. 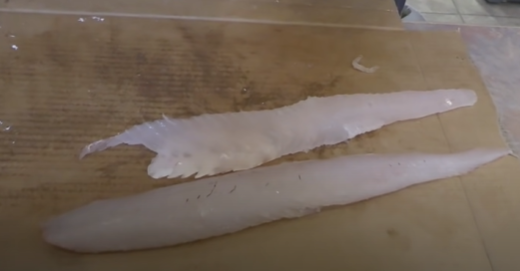 if you want to watch the complete video of the method.

Q1: How to fillet a walleye with electric knife?

Filleting walleye with an electric fillet knife is not any different from filleting with a manual knife. You can use an electric knife for the same method above to fillet walleye. Please be careful when using an electric knife and ensure the trigger button is in its best working condition.

Q2: How to hold a walleye when zippering it?

Always hold the walleye upside down from its tail meat. Holding it that way, you will easily remove the pin bones zipper. Otherwise, there are high chances of ruining the fillet.

Now, as you know how to fillet a walleye, we are sure that if you try doing it once, you are never going back to fishmongers for it. Filleting walleye is a skill that you will master with practice. The more practice you do, the faster and better will be the filleting process. Best of luck with frequent walleye steaks and curry meals in your home.

Hi, I am Edna Oneal, a professional chef, and a full-time mom. Here at Kitchen Aim, I provide a variety of recipes, cooking tips, and unbiased reviews of products that I use.